What is IntelliAssign in Freshchat ?

With IntelliAssign you can automatically assign incoming messages to agents or groups (teams) by configuring their load level and conversation limit.

How is IntelliAssign different from Assignment Rules

Assignment rules is a rule-based assignment method and a message will be assigned to an agent or group if the specific conditions that you set (such as the message content, and/or user’s country) are met.

IntelliAssign on the other hand follows a load-based or round-robin method (you can choose between these two depending on your business needs)  to assign conversations based on the load or number of active conversations in an agent’s queue, which you can pre-define.

Go to Admin > IntelliAssign > Switch the toggle to Enabled 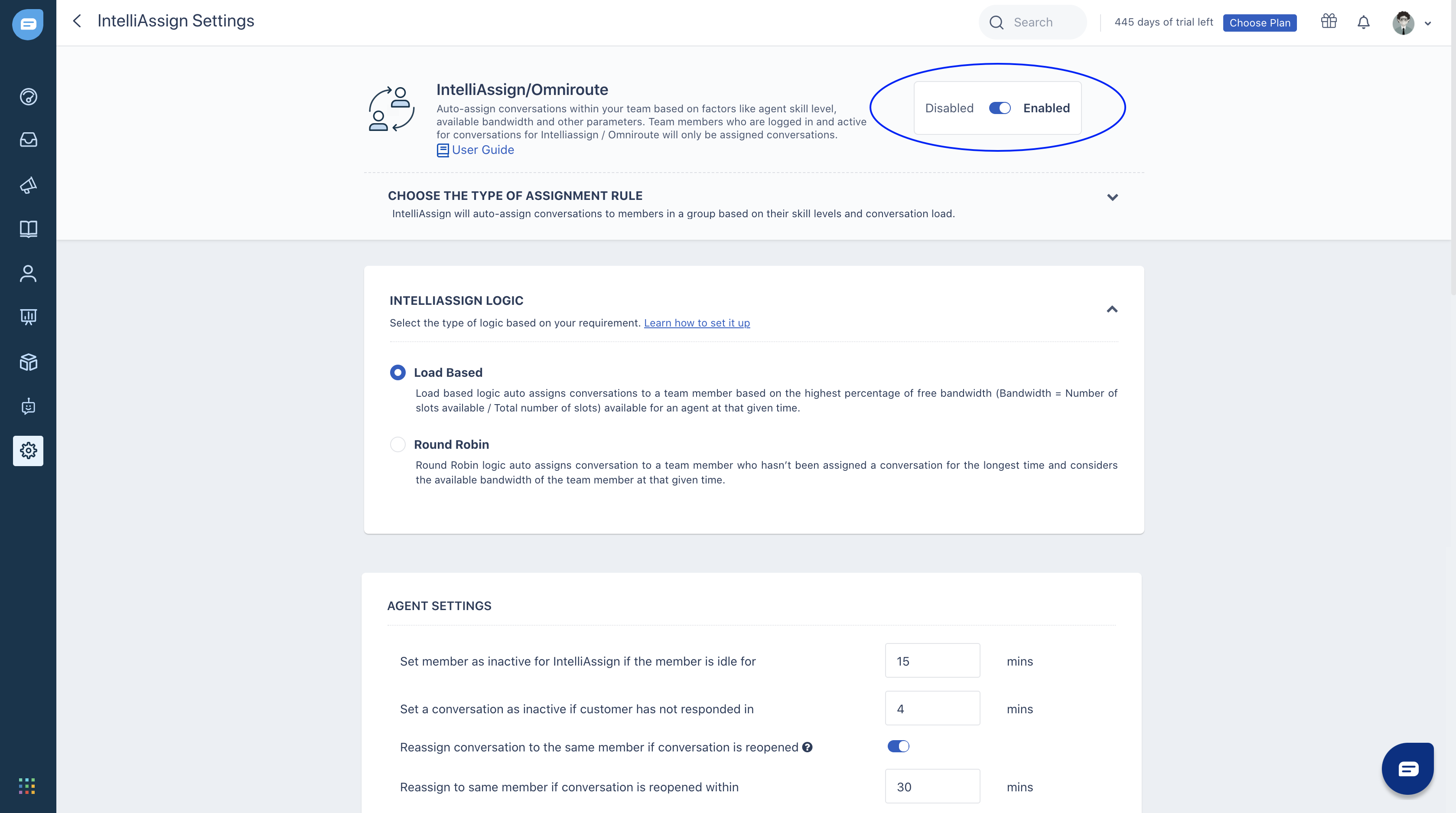 Load-based logic assigns conversations to an agent who has the highest percentage of bandwidth at the moment and for whom a conversation hasn’t been assigned for the longest period of time.

Round Robin logic auto-assigns conversation to an agent based on who hasn’t been assigned a conversation for the longest period of time and their active conversation limit availability. 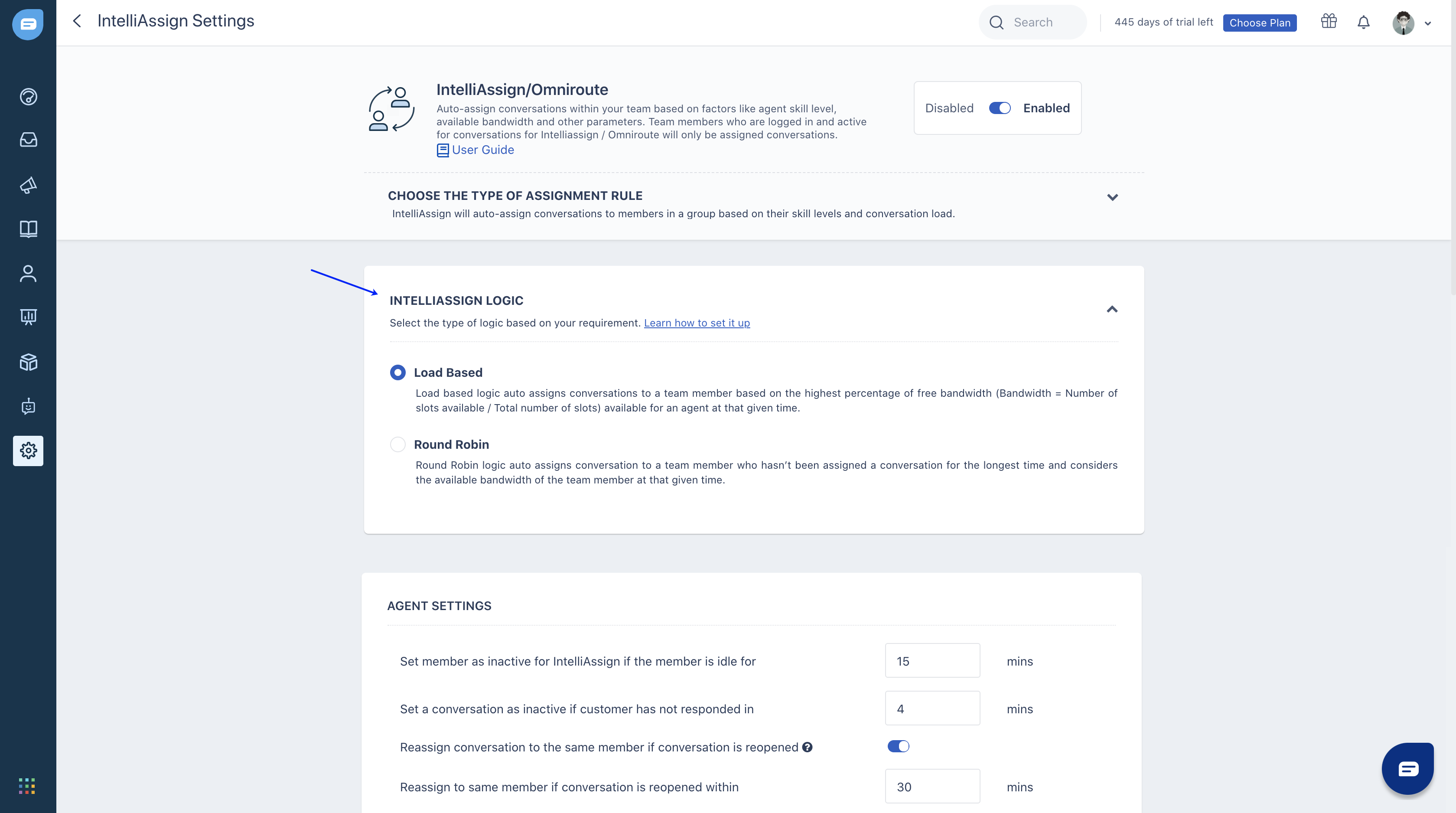 In Agent settings, you can define idle time for agents, conversation time-out limit (when a conversation becomes inactive), reassignment condition, and the number of chats an agent can handle at a time. 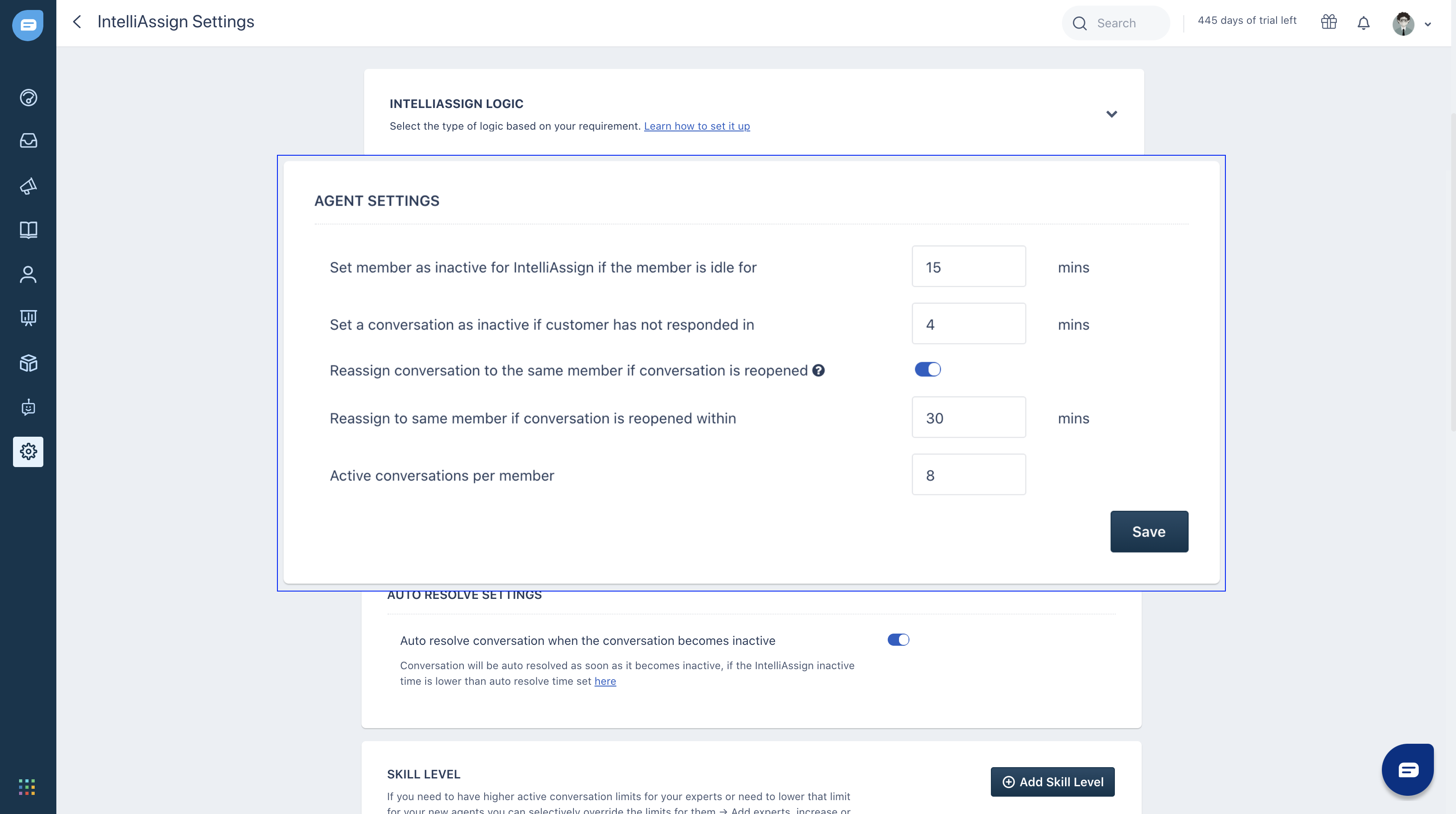 How does conversation reassignment work

When a conversation that has been closed (resolved) and moved to the resolved queue is reopened again, because the customer sends a message after it has been marked as resolved, you can reassign it to the same agent who handled it in the past.

But there are a few conditions that have to be met for you to be able to reassign it to the same agent.

To improve your team’s productivity you can auto-resolve (close) conversations with customers who have stopped interacting. In IntelliAssign, you can configure auto-resolve to automatically resolve a conversation when it becomes inactive. 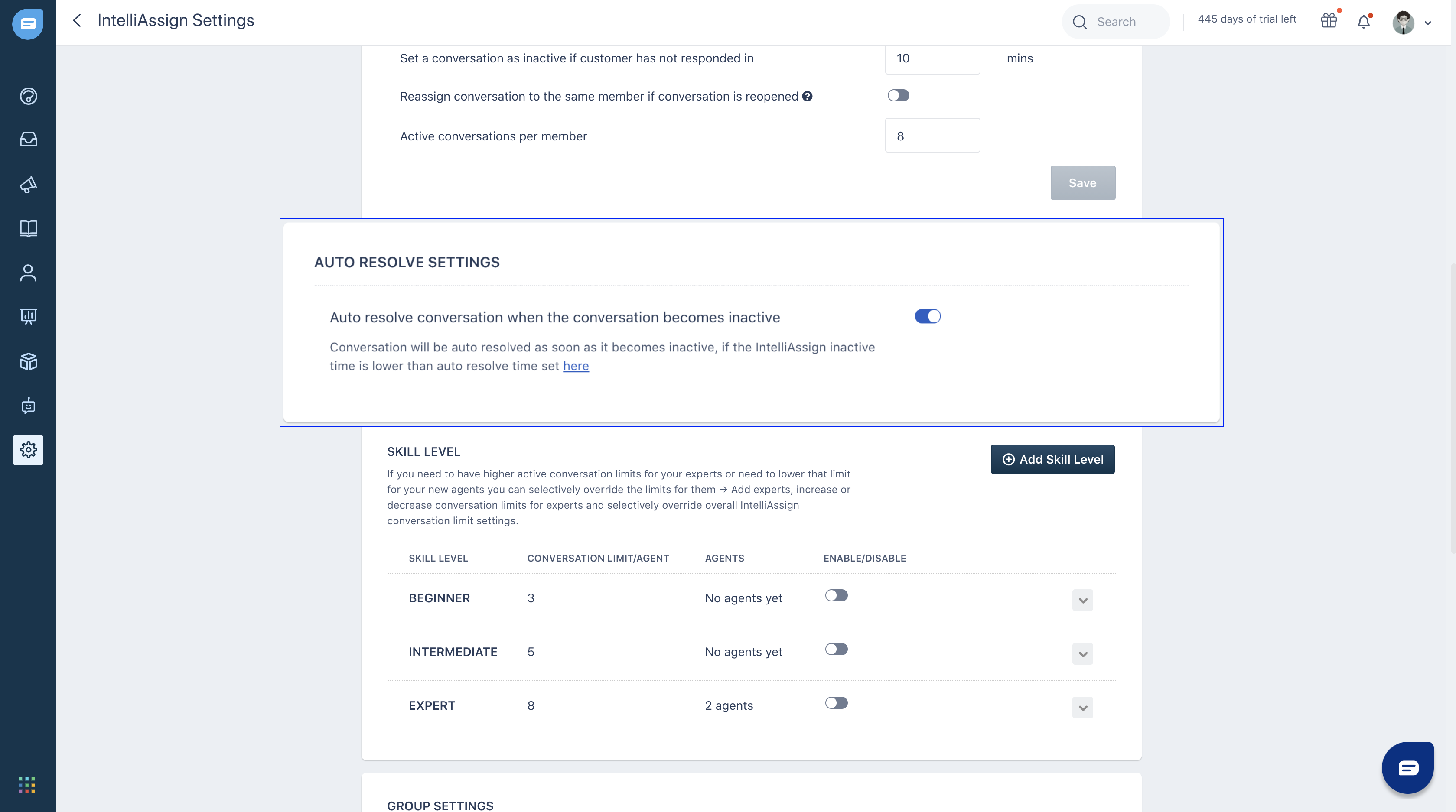 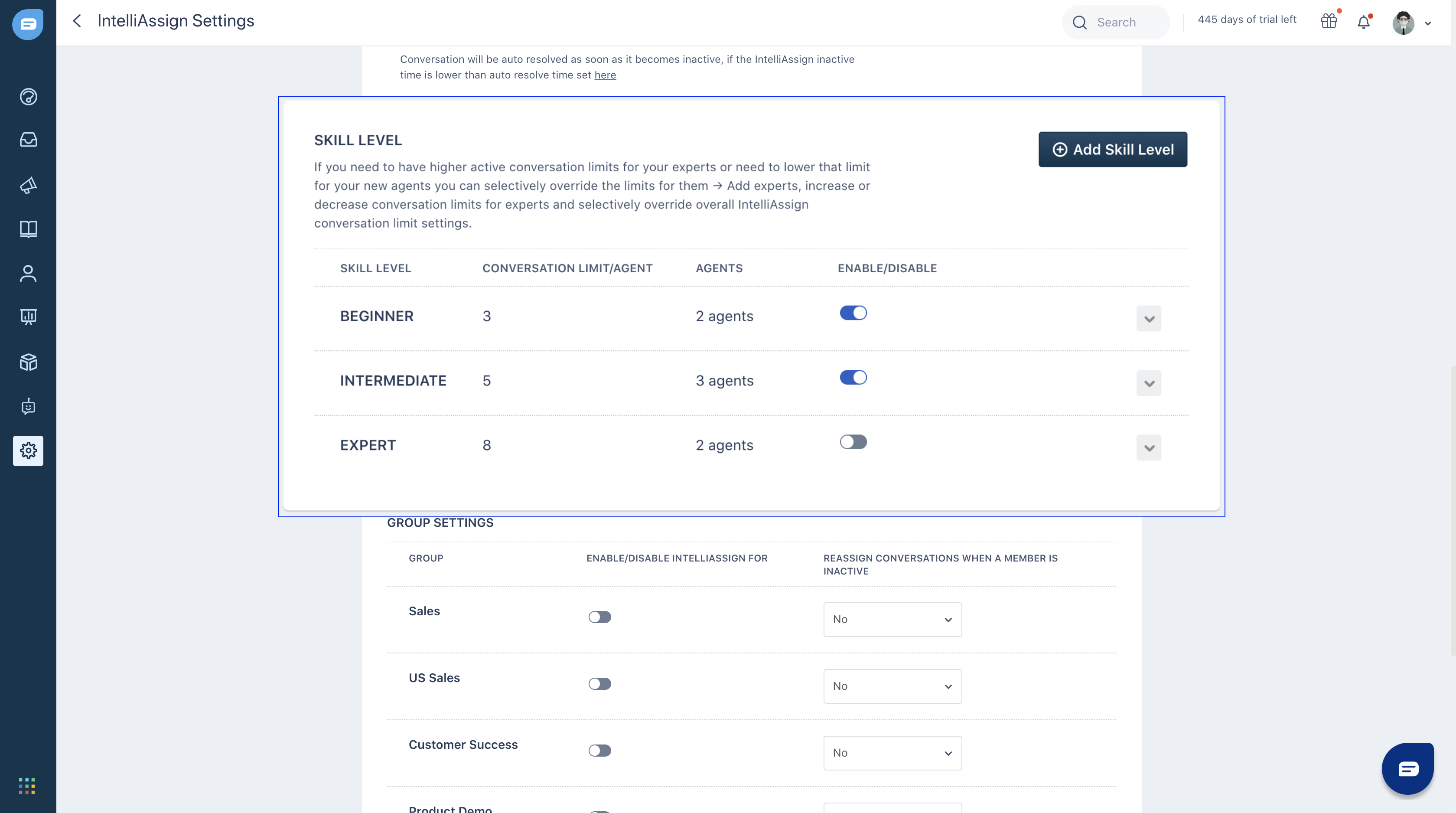 The conversation limit that you define here will override the overall ‘Active conversations per agent’ that you set under ‘Agent Settings’. 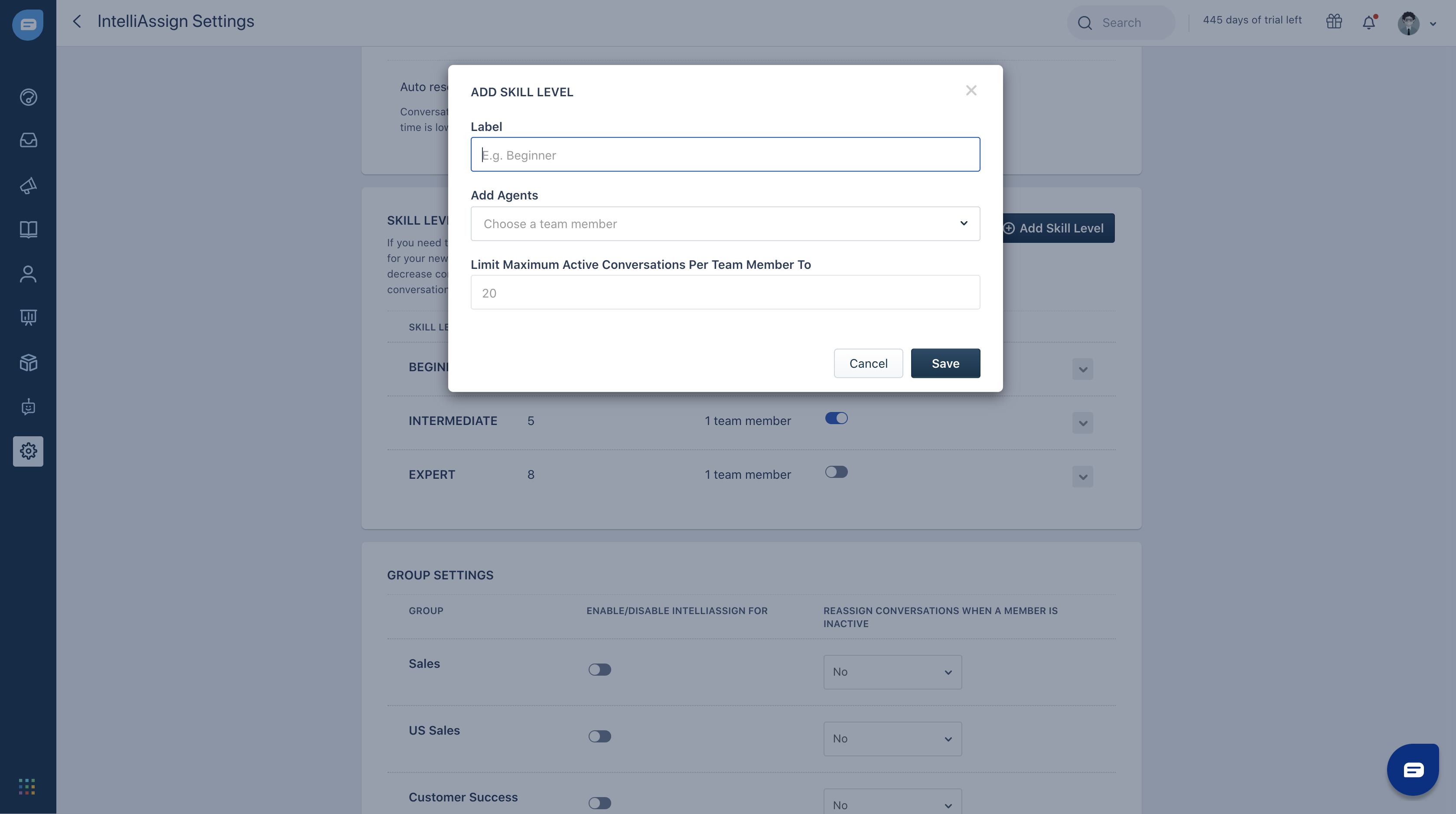 You can also enable/disable a load level anytime by switching the toggle on or off. Or edit/delete it.

Apart from auto-assigning conversations to agents, you can also distribute chats to different teams (groups). 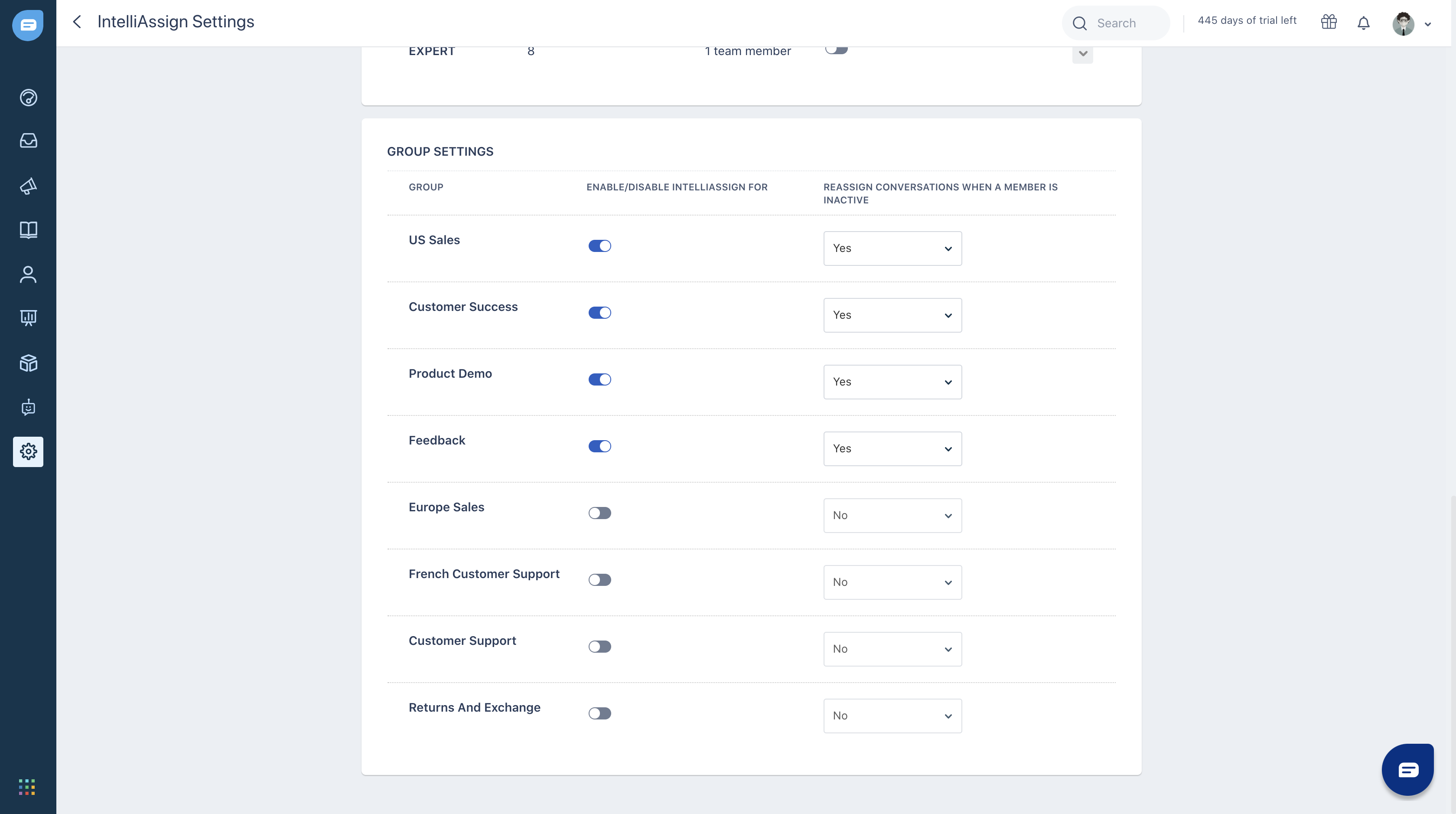 All the groups that you have created in Freshchat  will be displayed here. All you have to do is move the toggle to enable IntelliAssign for a Group.

Plus, if an agent goes inactive during a conversation, you can reassign it to other active members within the group. Select ‘Yes’ from the drop-down to enable this and the message will be reassigned to the member with the least number of current active conversations in the group.

With Omniroute, you can balance the workload from across multiple channels in one place. Admins can set ticket (Freshdesk Support Desk), chat (Freshchat ), and call threshold (Freshdesk Contact Center), simultaneously, for agents.

Omniroute is enabled if your Freshchat account is integrated with Freshdesk. Please note that it currently isn't available for if you're on the Omnichannel plan (with Omnichannel groups enabled)

To set up Omniroute, Go to Settings > IntelliAssign > Switch the toggle to Enabled and select Omniroute 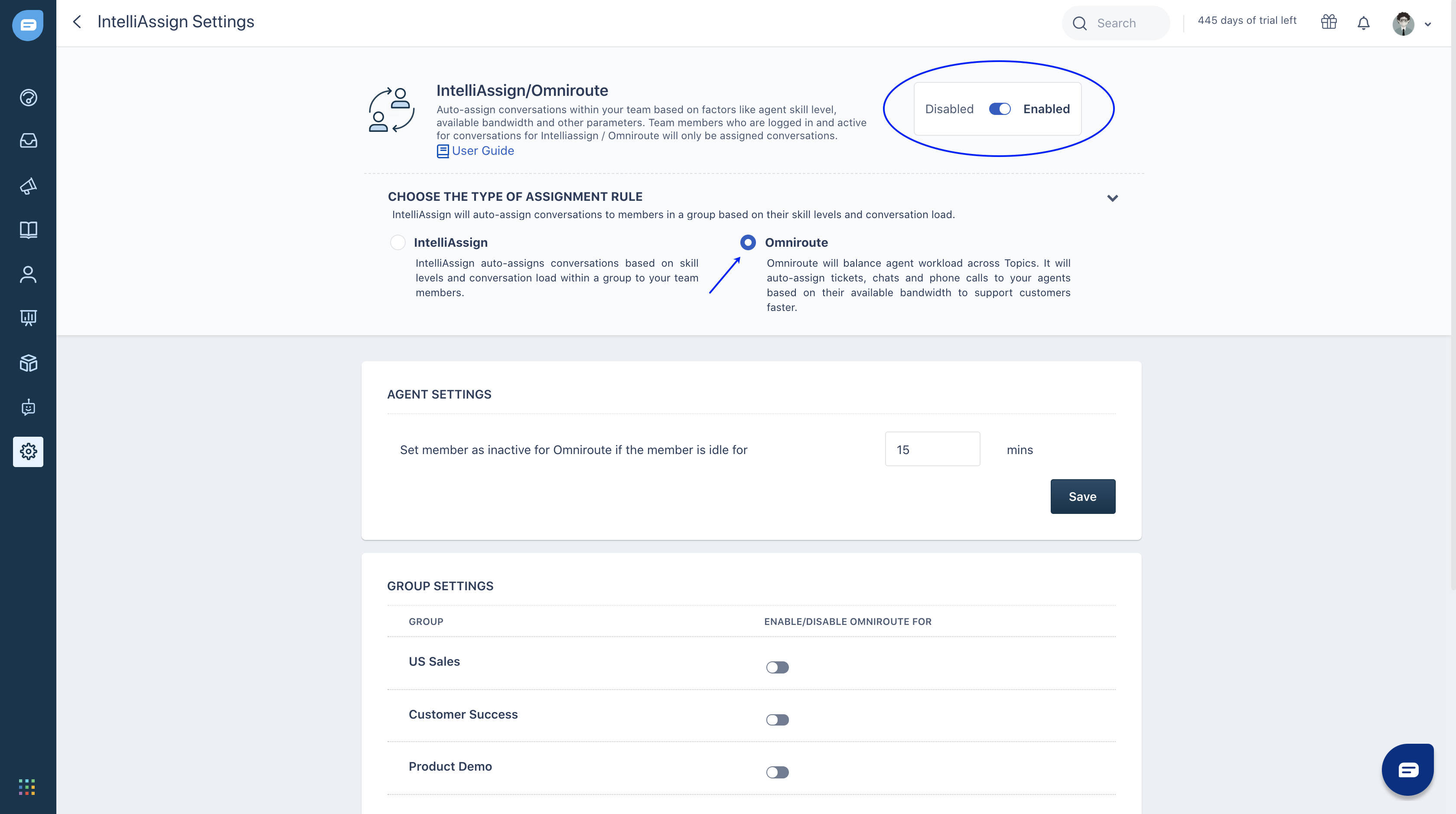 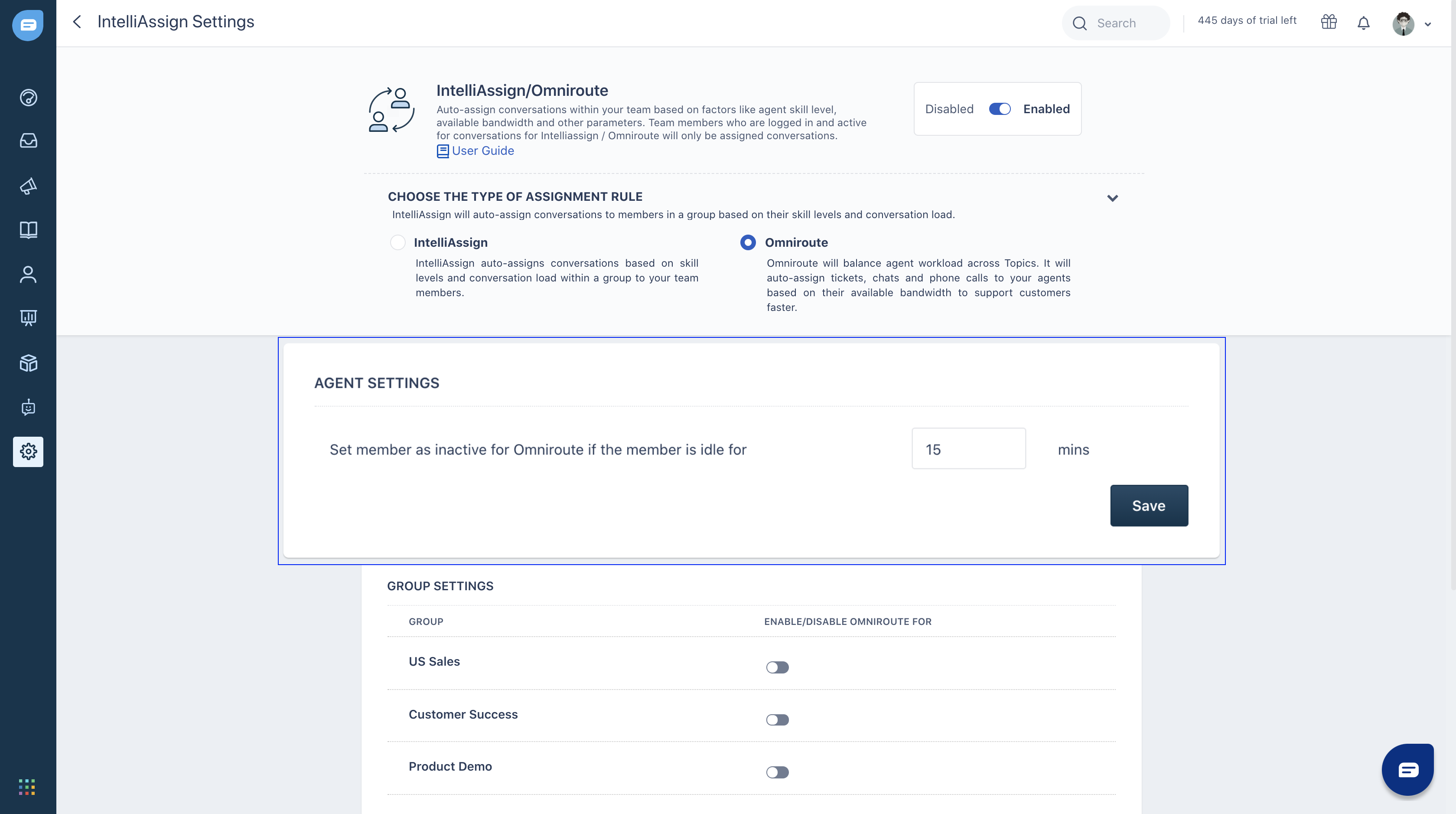 Similar to Intelliassign, you can also distribute chats to different teams (groups). 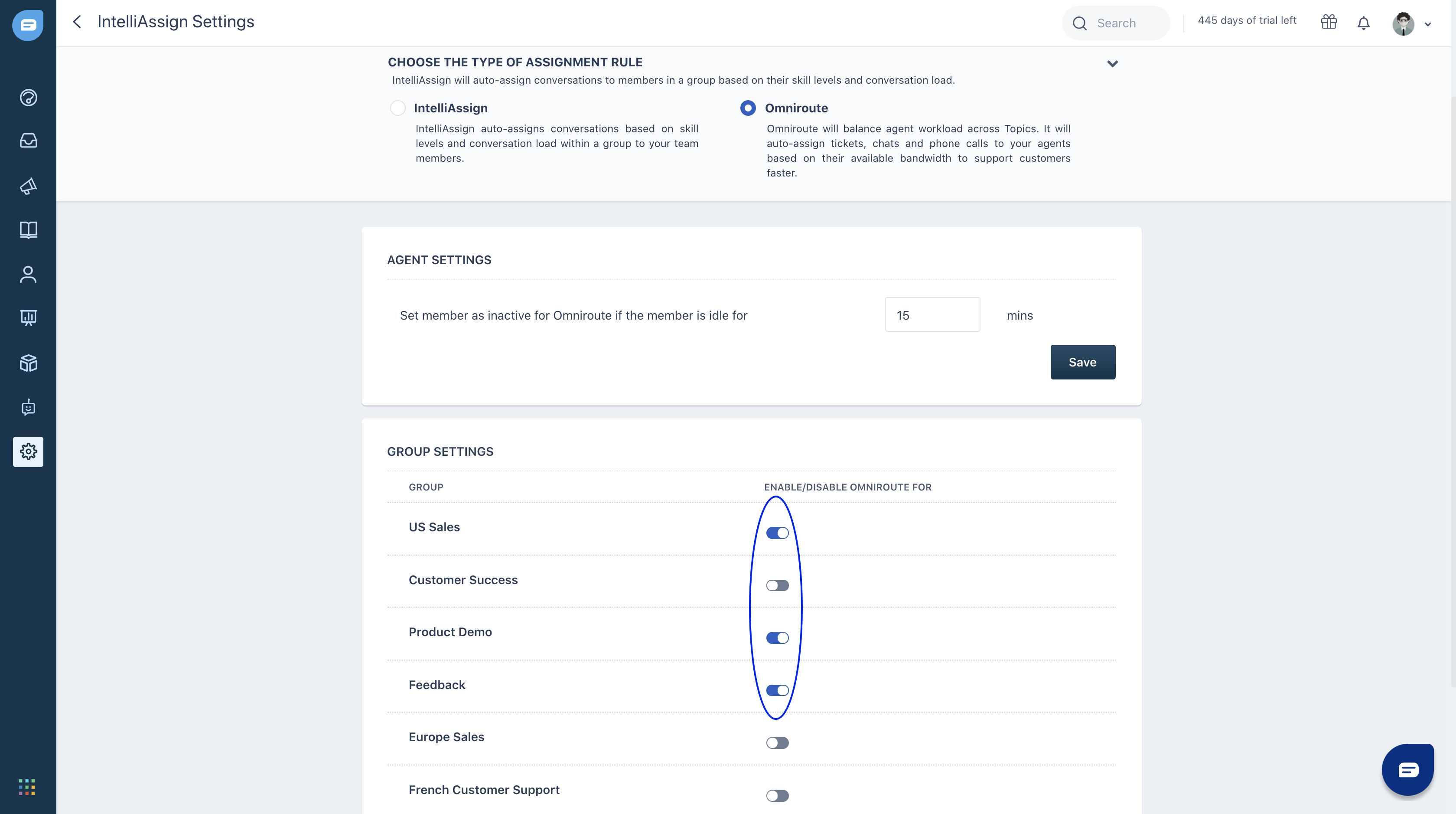 Only agents who have marked themselves as active on Omniroute, will be assigned conversations. 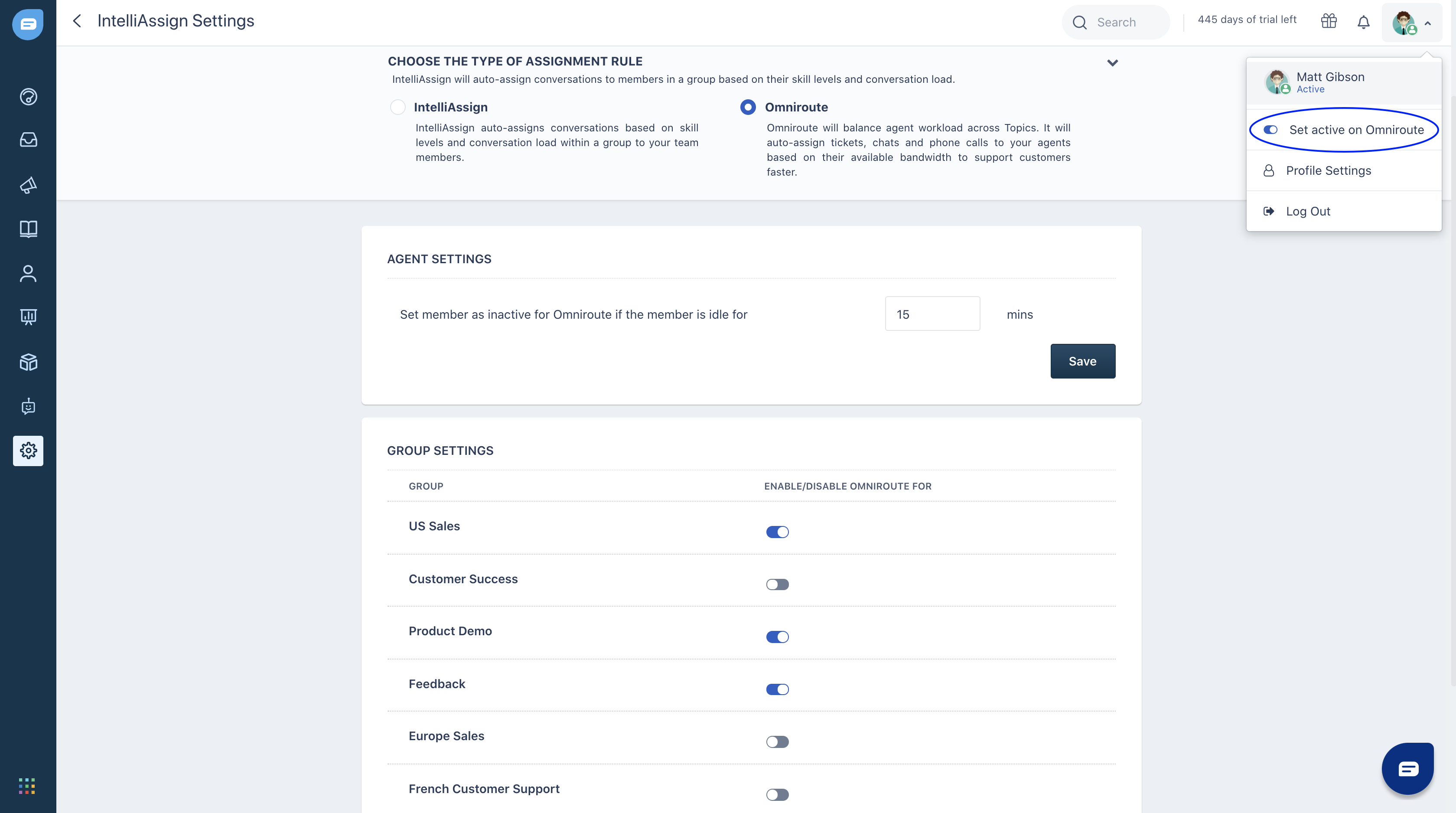